I went for a long walk this evening

Trying to find a tree similar to one I saw this afternoon up in Oswego, NY

During my more-than-one-hour walk tonight, though passing at least 30 people, no words were exchanged.

The solitude was nice.

There was a sweet moment of acknowledgement between myself & a father walking with his young son – as we passed in opposite directions, the child said something funny & I laughed & so did the father

3 seconds of eyes meeting & that was all.

I mention all of this

“Did you just take a picture of that tombstone?”

So I stand up & turn around 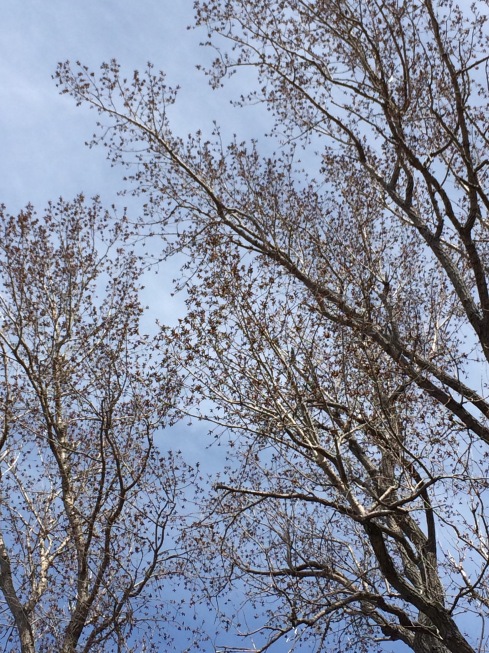 My short answer to your question is my polite attempt to let you know that I’m not interested in having a conversation.

“Did you know him”

My short answer to your other question is my second attempt to let you know that I’m not interested in having a conversation.

All due respect to local traditions, but my backing away from you is a not-so-polite way to let you know that I’m seriously not interested in hearing more about you and your friend sleeping on a grave of one of the soldiers buried here.

And then, “do you speak English?”

Thankfully, he then pedaled on his way

I wanted to feel the water of this Great Lake

But there was fencing

Dude bro was gone, & no one was around, AND there was a hole cut in the fence

So I crawled through it

(This is the view on the narrow strip of land between the lake & the fence, aforementioned cemetery just beyond)

I didn’t go down to the water

I didn’t dare not being able to scramble back up, OR being caught

The smell of creosote was strong from the new railroad ties

(Backpack set there to show scale)

It must have witnessed so much in its long lifetime

If anyone recognizes this bud/blossom, please let me know.

There were many scattered about under the canopy & it’s kinda sticky.

I had to get back home, otherwise I would have tried to find a shoreline with public access. 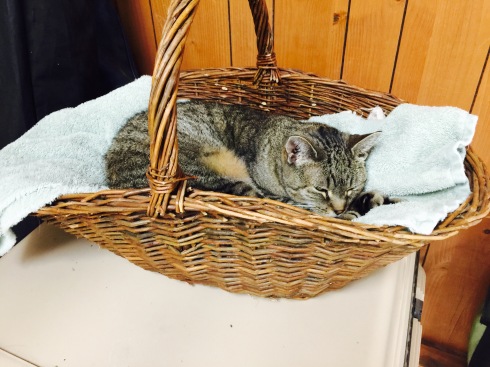 Wishing all a peaceful night.

Blessings on the Ancients.

Even if I’ve been sick nearly a month
I love Winter.

My spirits lifted instantly upon smelling that snow-coming-soon air

Our Greater Lungs are exposed in Wintertime
Yes 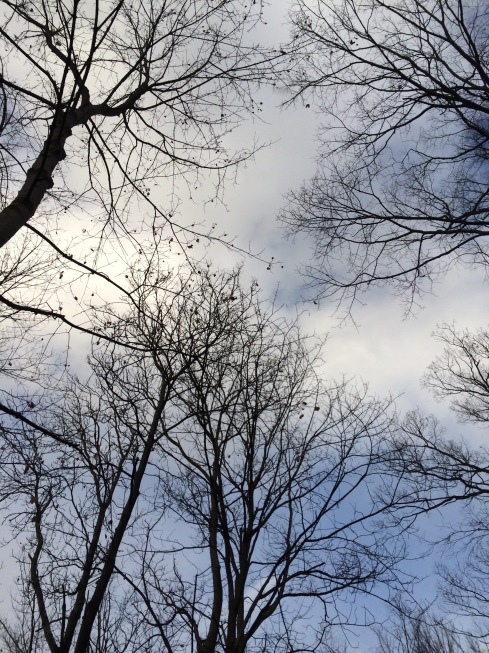 This is our vascular system!

Reflecting the past couple days on the breakup which occurred back in October
I keep visualizing cutting the invisible cords that run all the way to Minnesota.
I usually try to pull back the cords
But not this time.
It’s big scissor time 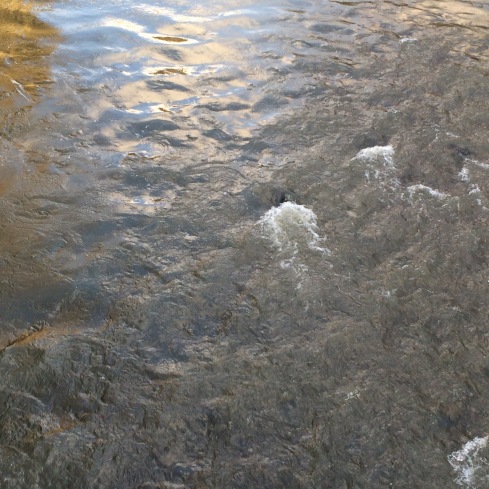 We are in Winter
The Water time – the Mystery time

There was a detour
I was headed in a direction, heart full on, totally willing, and the Universe has other plans.

We’re on a Detour, honey.

Let the minerals from Autumn grief feed the Waters of Winter 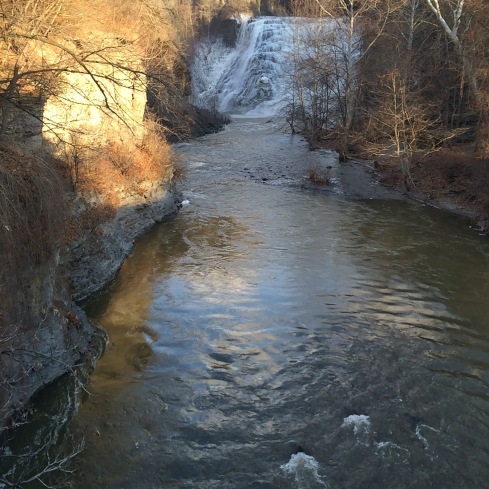 Blessings on the silent creatures
The Trees, the Bees
The ones we depend on for so much

Blessings on all beings

How to hold the heart gently. 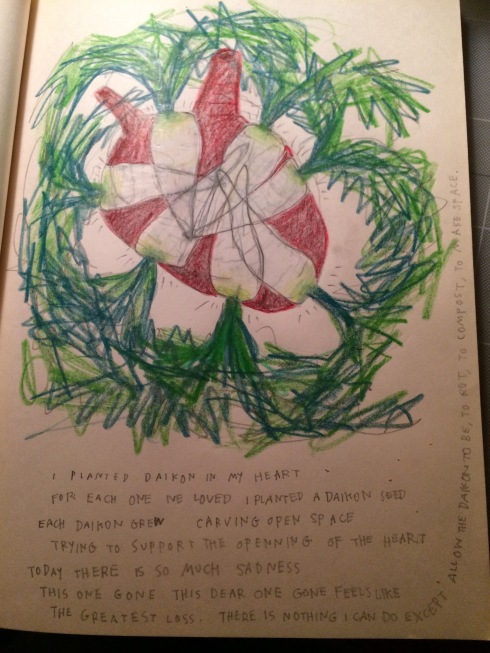 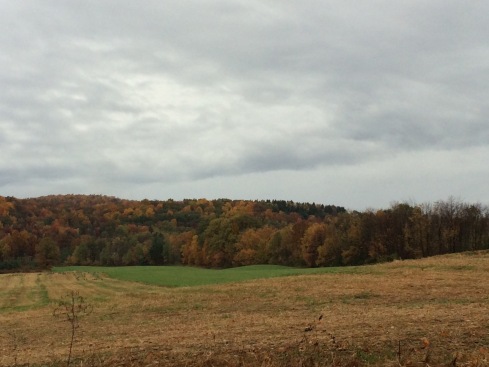 Seeing what is present, and cultivating gratitude for all the goodness

What do you do?
How do you hold the heart gently through grief times?

Frog & the happy for you seeds 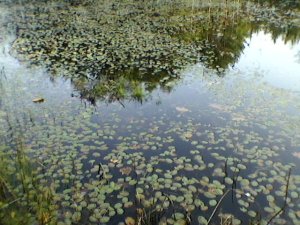 once upon a time

when i was very young

i rescued a frog

it was tethered by a cord

the frog let out a sigh of relief 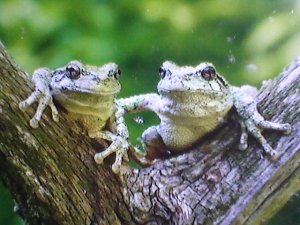 it dove into the water

i watched it swim free

frog came back with a small sack tied tight

slung over its shoulder

and presented it to me with a gesture to please, take it

so i offered out my hand

and frog set the little sack down in my palm

the water slid off of the material quick

i bowed and said thank you so

popped back up and said

“they are happy for you seeds”

and before i could ask what that meant

in and out of relationships

i planted a seed for each one

each relationship i planted a new seed

and tried to keep the plant alive

i tried and tried

and practiced tending while practicing being happy for others

that i began to learn how to care for this plant

i’m happy for you

i’m happy for you

i have a friend, she’s a natural, with this Mudita thing

Muditā (Pāli and Sanskrit: मुदिता) means joy. It is especially sympathetic or vicarious joy, the pleasure that comes from delighting in other people’s well-being rather than begrudging it.[1] The traditional paradigmatic example of this mind-state is the attitude of a parent observing a growing child’s accomplishments and successes, but it is not to be confounded with pride as the person feeling mudita must not have any interest or direct income from the accomplishments of the other. If we can be happy when other people are healthy and prosperous, it is called mudita; the opposite word is envy or schadenfreude.

for me, Mudita didn’t come so natural

i had to practice and practice

and practice some more

with friends and relations 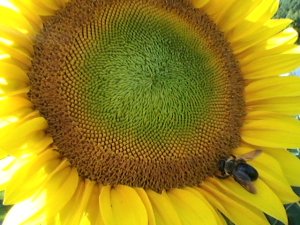 yes, i still now and again feel the arrow of envy 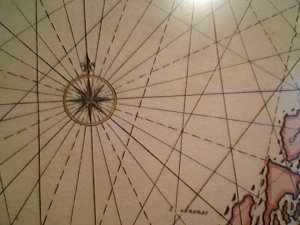 like a clumsy monster walking through a shallow pool 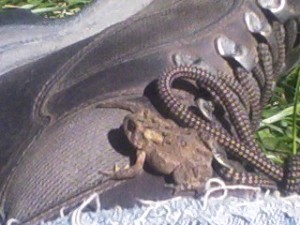 i remember this frog

and the generous gift bestowed upon me

and tending to the happy for you tree 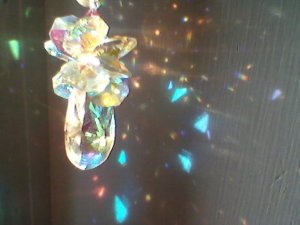 we all know that things can change on a dime, but it’s easy to forget.

so i began to blog because i fell in love with someone last Winter.

in a way that called me to be a way i didn’t know i could be.

it didn’t unfold in that capital R relationship-y way 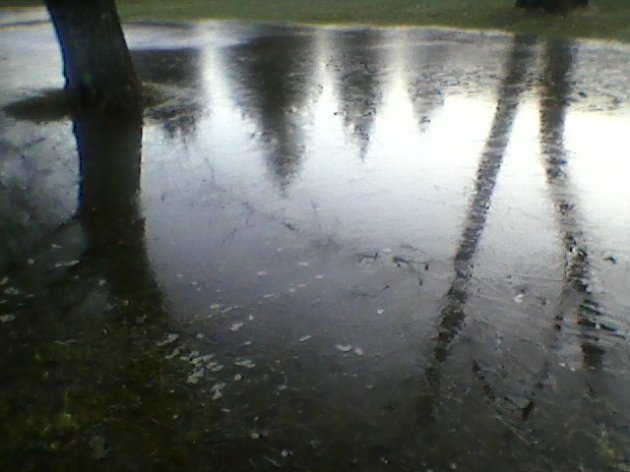 we were, and are friends

this is the best of things.

i began to blog.

because i had stopped farming

and this relationship-connection where sharing occurred was no longer there…

because i felt i had to do something

the energy had to go somewhere

i began to blog.

not because i think i have “something to say”

it came more out of a sort of need

i don’t write much about relationship (or Relationship)

but find that i think about relationships a lot.

not just in that “longing” way, but just thinking about it.

i’m in relationship with everyone

i feel sad, grief i didn’t expect to feel

upon seeing images of a beloved teacher who just passed away.

someone who was very warm, very present, and very kind.

i’d often drive by her house, & every time i would think fondly of her

even though i had only been there once.

i knew it was her house, her home

and memory is a funny and wonderful thing 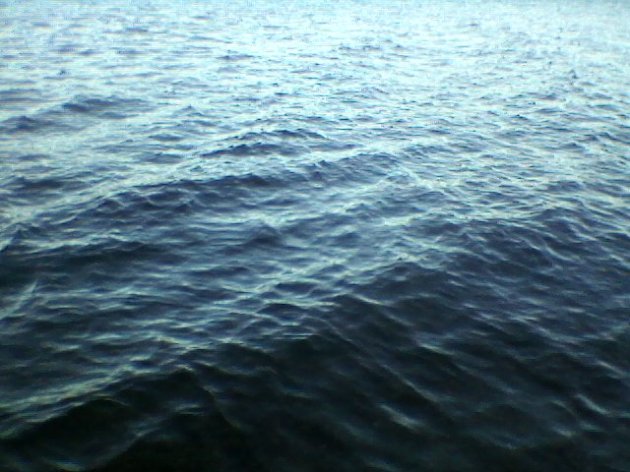 i feel lucky, fortunate, to have shared some time with this very kind, earthy, strong woman.

and i guess it just brings home

that this time we are here is very short

and we all know that things can change on a dime

the truth of that kinda freaks me out, and i’m feeling it today.

feeling a kind of achy love feeling inside

for the people & critters in my life today…

thinking of her family, and those close with her…

feeling the web of connection today…

why i gave up on internet dating.

for about a month.  maybe.

i tried because i seem to be invisible where i live.

well, except to what seems to be men over 65.  which is not really what i’m lookin’ for in a date.

it was just too weird for me.

i know, i know, it works for lots of people and blessings on all of ’em.

but for so many reasons i felt uncomfortable with it – i mean, just the whole intake form…

specifically it was the “5 things you can’t live without” list that got my head spinning.

sure… clean water, relative health, friends, organic food nearby, & etc… that sort of thing is a given.

i can’t remember exactly what i wrote (it has been a while since deactivating my account) – but it was something along the lines of:  my hands, something to write on & write with, friends… and who knows what the other two things were.

the thing is, i kept thinking about it.

maybe i COULD live without my hands.  sure, it would really really suck, but people do lose their hands sometimes, or even are born without hands, and they get along.

i began to actually notice the things i felt i absolutely had to have, either where i live or on my person when leaving the house on any given day…

and i noticed that these 5 things were not on my 5 things i couldn’t live without list.

the rabbit-mind began to spin…

was this dishonest?  was i being a liar?  wouldn’t it be best to be honest?  what did i WANT people to see?  what would people want to see?  it didn’t feel true.  i began to feel like i was setting a stage, like for a play or a musical…  (or probably a comedy, or perhaps, a drama…)

i could have said ANYTHING on that 5 things list…

i’m pretty sure that people don’t really give a crap that i can’t live without soap & a nail scrubber.

or my very sexy bite guard.

or toothpaste for sensitive teeth.  (for real, i’d be screwed and forced to eat pudding for the rest of my life were it not for this stuff.)

i suppose if i didn’t live in such a small city, i’d be tempted to simply list the REAL 5 things i can’t live without and see what happens.

anyways, it’s one less thing for this rabbit-mind to spin on about.

now i find myself thinking up “more 5 things” lists all the time, like a game…

How the Good morning photos began…

there’s this joke between my mom and me… about time, and how i most easily remember my life by the relationships i’ve been in…

too hard for this brain to keep organized.

but people?  no problem.

how the Good morning photos began is not so different, it’s just that i actually remember the year, but i think that’s because i was farming at the time…

it began in early Spring

and that’s where i would keep my dinky flip-phone

there it sat, perched on it’s very fancy holder (that would be two drywall screws set into the window sash), attached to the charger where it sat through the night.

every morning, when i woke up, i’d pad over to the window, (not far from the bed… it was a studio apartment, and for the record, i loved it – though it was cold, but that’s another story…)

so i’d look out at the beautiful view, and then i’d send a simple text…

(capital G thanks to the automatic setting)

then i’d move into my day.

time goes on, lots happens (more other stories), and eventually, we break up.

but i’m fortunate to have dear friends, and they made it abundantly clear that it would be best to not send him ANY MORE TEXTS

as i stood at the window, looking out at the gorgeous view, feeling something in my chest (probably fresh heartbreak) and with that ache of wanting to share, i took a photo of what i saw

(i had just learned how to ‘upload’ that summer – insert: techno-dork happy dance)

so that’s how it began

the 6th of November 2009, (date provided by Facebook date stamp thankyouverymuch) in that studio apartment, at the window, with that gorgeous view.

and since then, every morning, when i’m awake and ready enough to go outside, i go to roughly the same spot, (even if i’ve since moved, or i’m house sitting or wherever) and take a photo. 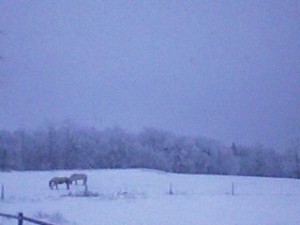