This was from earlier today up at a retreat center in upstate New York where I’ve been for the past ten days.

I know I just stopped posting a couple weeks back

I’m involved in a Contempletive Care for the Dying program through the Rigpa Foundation & it’s been asking for more attention than I had anticipated.

And to prepare for the retreat, was working every day & just became overwhelmed with all the reading & writing & work on top of that.

(A video short of Sara working Conner & Larry, covering up the garlic we just planted.)

Fresh ginger drying off & heading to the freezer.

So, I’m now considering deferring graduate school until the fall of 2016.

(Flecks. My kitty from way-back-when I was a child.)

For now I want to focus on the program I’m currently in. 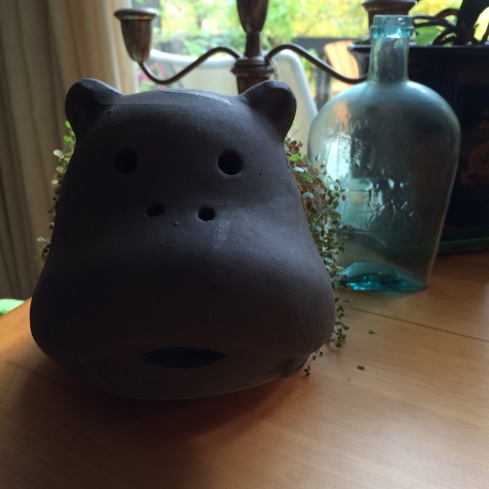 The good morning photos may not come every day…

I need to allow for a little more room in my life for now,

& to focus on my project for class, sitting practice, staying on top of the reading (which I’m slow at) & writing assignments.

We had our first snow at the farm on the 18th of October.

Thank you to everyone’s encouragement, especially regarding going back to school.

Wishing you all good things.

There’s a bit of a walk to get to the field.

First there’s the path which crosses a dry/wet stream… 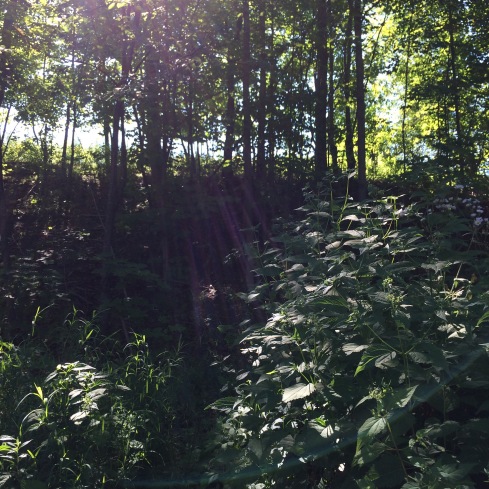 The sound of laughter leading through a canopy of hardwood trees

Sunlight – a sign of being close to the field

Almost there, just out of the woods, laughter louder…

A faraway welcome greeting from friends

It’s good to be known & loved.

Okay, down to business.

I dig. That means I’ve had years of experience wielding a digging fork so as to be less likely to stab the bulb of garlic.

I don’t have a photo of a stab, but if you can imagine gouging a 1/2 inch wide steel tine with the force of a human leg behind it pushing through soil & scraping into the tender flesh of a below ground vegetable, well, you get the picture.

Both jobs are important.

Those that dig, loosen the soil below & around each head of garlic with a 4-tine digging fork. Methodically moving down each row.

The ones who pull, grab low on the stem to unearth the garlic intact.

The soil is brushed from the roots & bulb, then laying it (gently) in piles. 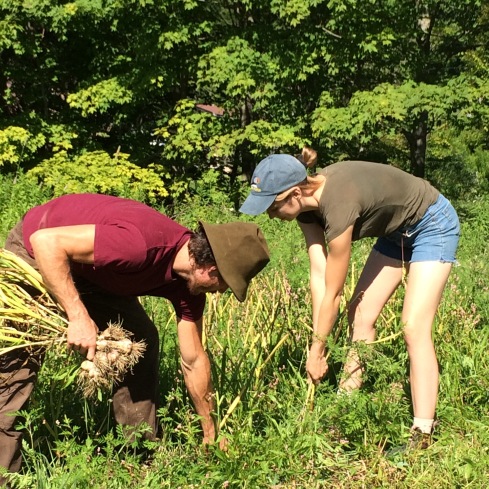 Bundles are made, & tied in such a way as to be strong enough to hold the weight of about 15 – 20 stalks in each bundle, which are then tied via square knot in pairs.

These will be hung over nails high in the barn to dry.

It was a beautiful day – and we dug the entire half-acre of garlic with the least amount of stabs EVER.

This is the river of bundled garlic awaiting Sara & two of her horses pulling the wagon. 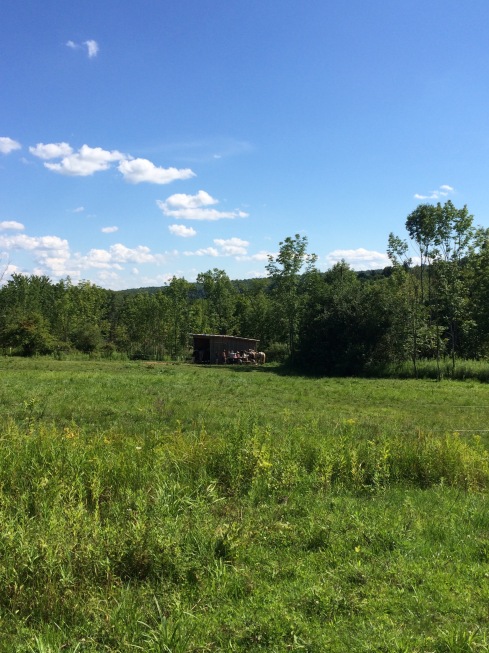 A view from the field across the pasture where the horse barn lives.

A closer view as she harnesses the horses…

Connor on the left, & Larry on the right! 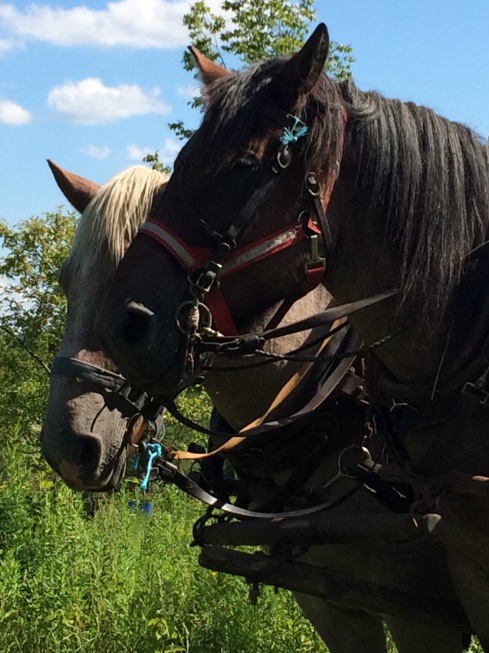 I mostly was taking many videos at this point of the day – but I didn’t ask everyone for their blessing to be posted on the blog, so my apologies for the choppy sequence.

Once the cart was loaded to capacity, Sara drives Connor & Larry down a lane then up the road to where the garlic is hung at the barn near the house. 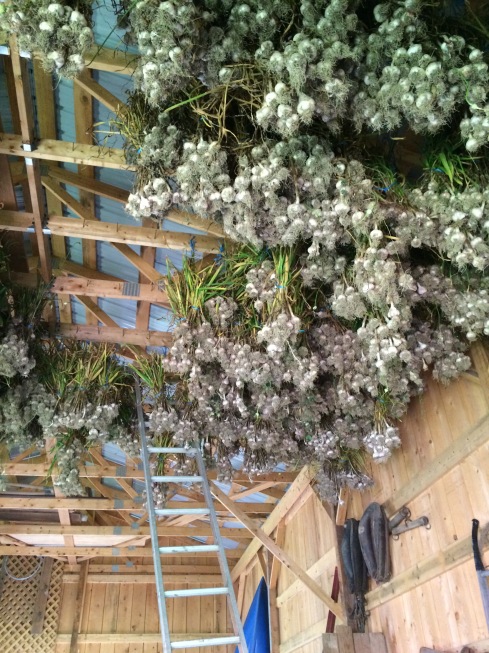 Then they return with an empty cart, and once again the cart is loaded back up with the remaining garlic, & Sara drives the horses back to the barn by the house where the rest of the garlic is hung.

While I’m not afraid of heights, & used to be one of the people at the top of the ladders, it’s a heavy job so I bowed out this year of that final step.

And it was with Sara’s blessing that I stayed and simply sat in the field & enjoyed just being there, taking in the sounds.

Half-acre of garlic, hanging from the barn rafters.

I felt fatigued from the long day of physical work out in the sun, and I felt happy & proud & grateful to be a part of this yearly ritual & especially, with the awareness that this garlic allowed the horses to have hay in the winter & Sara’s daughter to go to college… Well, I felt content in a deep way.

there was a lot of snow last night, roads were sketchy

so instead of driving home, i stayed with my friends for the night. 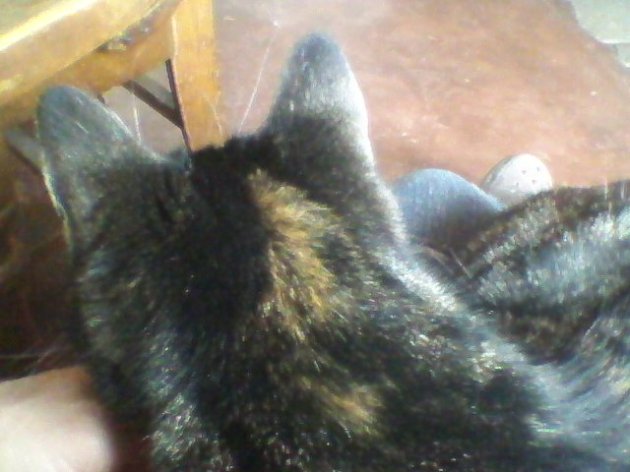 (kitties on the lap force a pause in craft-time)

i was working on a sweater

and happened to be sitting near the masonry stove.

a fabulous element of this home

there’s even an oven in it.

i mean, you can sit right up against it

it offers a soft heat, and uses way less wood than a traditional wood stove.

in the morning i found myself leaning up against it and it was still hot after a fire was lit the night before.

Clare, Connor, & Sasha were standing near the watering holes where Sara turns off the solar electric fence.

that’s where i got to give them some apples

Connor is Clare’s son, and he’s the largest one of the three

terrible photo, but that’s Clare on the left

she’s an Ancient & such an amazing worker…

another terrible shot, but that’s Sara with Clare.

i’m used to the Belgians, though

and find they are my favorite breed of horse

Sasha is a light horse and he seems so tiny since Belgians are what are “normal” in my mind, having spent so much time around them… 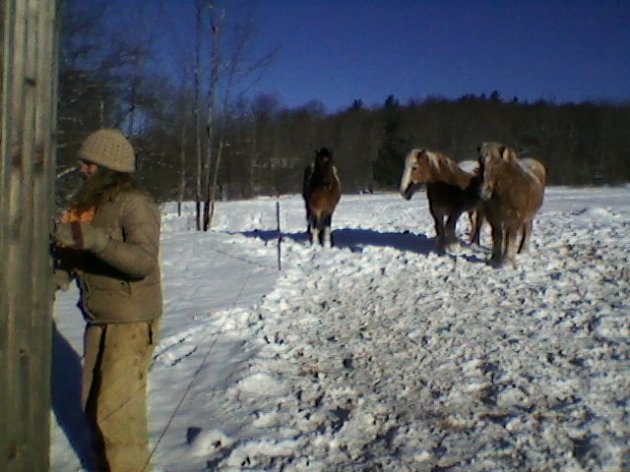 Sara heading into the shed to get hay & grain – Sasha, Clare, & Connor following soon after

Connor is so massive

and their coats are really shaggy & thick with the Winter 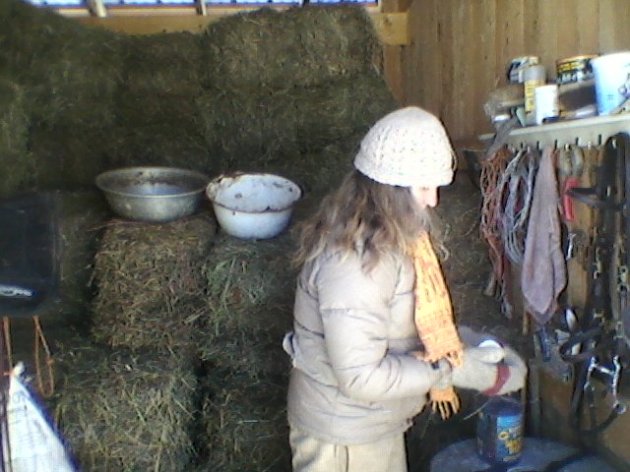 Sara takes such good care of them

Clare gets extra grain & a supplement for her joints

she also gets some extra hay to keep her weight up 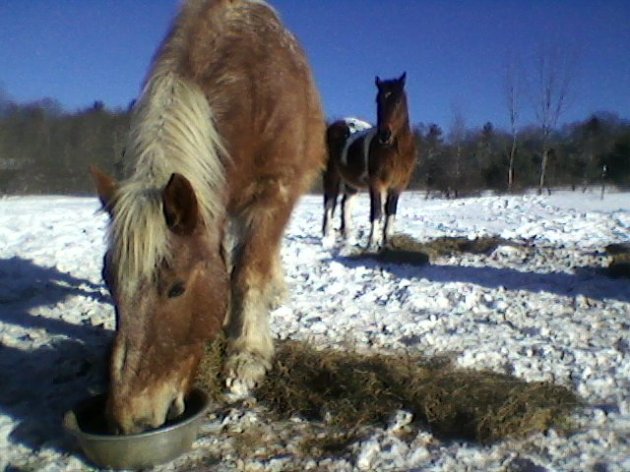 Connor munching his grain, Sasha waiting for his bowl 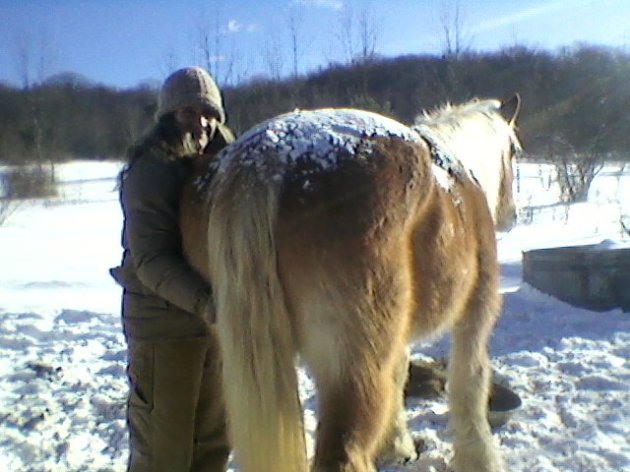 while Clare eats her grain, Sara works on her hip & leg… connecting with her dear friend through touch.

they have a beautiful relationship, these two beautiful ladies… 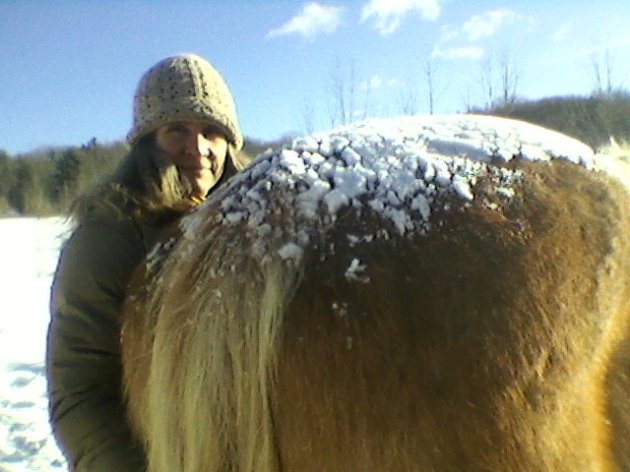 Digging a grave for Spritey

i got a call yesterday from my friend Sara

which normally wouldn’t be a big deal, nothing to write about

but the call came in the middle of the day – Saturday.

so i knew something was up.

turned out that Spritey, one of her 4 horses, had died.

she was calling friends to help dig Spritey’s grave.

i wasn’t able to go yesterday but went today.

it was cold today, snowing some, & grey.

a chestnut beauty with a calm disposition

we hacked & dug into the earth with pickaxes & shovels

the soil was hard

it was slow going work

people would come and go

working in the deepening pit

just near an apple tree

sharing ideas and experiences around beings we’ve loved who are no longer embodied.

as the other three horses stood nearby

Claire, the main mare – and Sara’s best friend for 27 years – got into the apple basket…

a mix of sweet and sorrow

a community net of friends supporting

the flock of wild turkeys that hang around walked by

i have no tidy way of ending this post 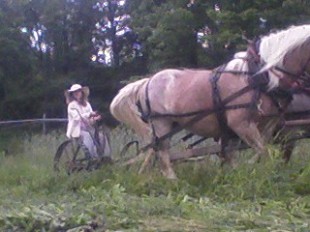 this is Sara working with Claire & Connor in 2011.

how she recognizes our connections and the interdependency of things…

the truth of the world.

i love this quote

Let yourself be silently drawn by the strange pull of what you really love.  It will not lead you astray.

it seems perfect that it arrived in my inbox this morning

as yesterday, reflecting on the last blog post had me thinking about my parents

and how it might have been for them when i told them in early 2006 about my choice to move back to New York to live and work on an organic farm.

not being a parent, i do try to put myself in their shoes as best i can.

at the time i had been working four years at a high-end spa practicing massage full-time.

i was making a “good living” for the first time in my life.

which had began to sprout when i was 21 years old

would not wait any longer

and when i was 34 i realized that if i didn’t do something i would regret it for the rest of my life.

so i left my first well-paying job

to move into an unheated, uninsulated “shackette” of about 10 x 13 feet with my cat to live and work and learn and grow (no pun intended) on a small, horse-powered organic farm.

i can’t blame my parents for questioning this decision.

“you’re going to work on a farm without getting paid?!?”

well, i’ll get vegetables and a place to live and i’ll get a part-time job i told them

(not yet mentioning the shackette…)

made it back to Ithaca just after the start of May

and after a few months, they could hear it in my voice – happiness. 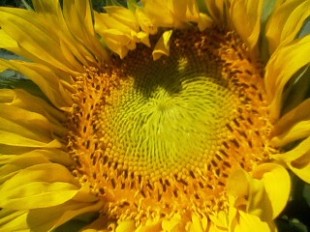 and the clear pull of farming, and returning to Ithaca

and how right now there is no clear pull

but something seems to be unfolding

even though it felt strange, the hermit-private-sort-of-critter in me was surprised by this pull

(this song running through my mind while at work)

i spoke about it with the Rabbits

how knowing people i know (including them) who were following my blog it felt strange to write… there was this sort of hesitation to write.

it required a certain bravery.

the two blogs i follow consistently are very honest about their lives.

it’s what i most respect about their blogs.

i could feel a familiar wanting to hide, to curl away from what i had shared.

(that would be a shy okra pod)

i found the internal reaction/reverberation from posting is dreamer a euphemism for procrastinator brought out a familiar wave of shame.

it has a silent, yet persistent corrosive action.

going public about this life

even if it’s a pretty low-key, relatively boring life

has a coming out quality to it.

a rawness, a nakedness, an exposure.

lucky me the Rabbits often will comment without my solicitation regarding blog posts.

their enthusiasm and encouragement feeds whatever brave thing within that got me starting to blog in the first place.

the best revenge is to live well

i’m not sure how that quote came into mind…

was it hung up somewhere in the house growing up?

but was struck by the word ‘revenge’ and how it lives in relative state – that is, if i live well, it’s somehow revengeful to someone or something

which didn’t and doesn’t sit well with me

and yet it’s a sort of pervasive thing…  this living well thing and the shame i have felt for living my life the way i do.

it goes counter to the culture which is projected on magazines, & various media

that i’ve obviously (and unfortunately) absorbed into my psyche

my life, measured by certain standards would not be considered a life lived well, or successful.

but i like my life, for the most part…

and to me, i live a good life

the feeling of shame or having-done-something-wrong feeling was pervasive, like an internal net of prickly woven shards of rusty metal

and the blog post turned up the awareness of this shame/net-suit.

that shard-y, rusty feeling has decreased.

not that it’s fully gone, necessarily

on a large piece of slate

that was in the barn nearby where vegetables were washed

sometimes to each other

sometimes creating them together

this was one she had written to me

(the only one i caught a photo of)

the rest were written down in a small book